Brushing your teeth is important, but most people don't realize is there is something just as critical when it comes to having clean, healthy teeth. Find out the "other key" most people completely dismiss - and the healthy alternative everyone should know about...

Doesn’t it make sense to take control of keeping your teeth clean and breath fresh with the same focus you put on other aspects of your body?.

It doesn’t take much thought to realize how everything you consume, healthy or otherwise, must pass through your mouth to get absorbed by your body.

So, it should not be a total surprise that using a toothbrush twice a day is important to reduce tooth decay…

The bottom line… using a toothbrush regularly is one way to help reduce plaque and tooth decay.

And I’ll help you discover what I believe is the total dental solution. 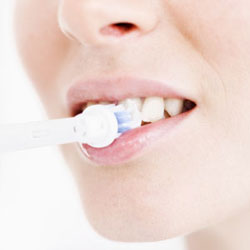 Signals Your Teeth Could Be Warning You About

Your teeth have plenty to ‘say’. The problem is many folks just don’t ‘listen’.

In My Opinion, It All Starts with What You Eat

If you’ve been a visitor to my site or a subscriber to my Newsletter, you know how I constantly stress the importance of eating a wholesome diet of unprocessed, low-sugar, and primarily organic foods.

Well, when you think about it… all food comes into contact with your teeth before it moves on to be absorbed into your system. So, eating a healthy diet is key to a clean mouth… it all starts there.

And when it comes to oral care, there’s a virtual war going on.

A clean mouth and teeth start with your diet.

In fact, there’s plenty of evidence showing fluoride to be highly toxic. Ever wonder why fluoride-containing products carry warning labels like…“Do not swallow”?

Despite what you’ve been led to believe by conventional health and dental agencies, fluoride is NOT an essential nutrient and in my opinion, it does NOT prevent tooth decay.

Plus, there are plenty of studies showing the dangers of ingesting fluoride, both from dental products and fluoridated water, including potential…

Water fluoridation around the world is achieved through the purchase of
chemically contaminated toxic waste chemicals from China which are then
labeled "fluoride" and dumped into public water supplies in local cities and
towns. That's the conclusion of a shocking new mini documentary released
today by the Consumer Wellness Center (www.ConsumerWellness.org).

The video is now available for viewing on NaturalNews.TV:
http://naturalnews.tv/v.asp?v=42652.

The 12-minute video documents the history of fluoride and how this toxic
chemical is produced as an industrial byproduct of the phosphate mining
industry. Decades ago, fluoride used to be released into the air through the
smokestacks of phosphate mining operations, but this resulted in the
widespread death of cattle and plants on nearby farms and ranches. To stop
the deaths, phosphate mining companies installed "wet scrubbers" that
captured the toxic fluoride chemical vapors.

While consumers might think that deadly fluoride chemicals captured in these
wet scrubbers are disposed of as hazardous industrial waste, the surprising
truth is that they are sold to cities and towns as "fluoride" to be dumped
into the local water supply where they are consumed by adults and children.
This is all being done to "prevent cavities" - a medical claim that
technically turns fluoride into an unapproved drug being used in an illegal
mass medication scheme.

The FDA has never approved fluoride as a drug, and no recipient of fluoride
has ever been medically evaluate for their "need" for the drug.

The full story of fluoride is revealed in The Fluoride Deception, available
for viewing at the Consumer Wellness Center website:
www.ConsumerWellness.org

The making of The Fluoride Deception

The video was created and narrated by consumer health advocate Mike Adams,
the executive director of the CWC. Adams is best known for creating the
"Blueberry Deception" documentary which revealed many name-brand breakfast
cereals that claim to be made with blueberries are actually made with
petrochemicals and artificial colors (and contain no blueberries at all).
That video is also available at the CWC website.

The Fluoride Deception also takes aim at doctors and dentists who have long
recommended fluoride without telling people where the chemical fluoride
really comes from. "They tell you it's good for your teeth," Adams
explained. "But they don't tell you how it damages your brain, your bones,
your health and the environment. They don't tell you about the toxic
cadmium, lead and other deadly materials that routinely contaminate the
fluoride dumped into the water supply."

As The Fluoride Deception ultimately reveals, the practice of water
fluoridation is a method by which the phosphate mining industry can dispose
of its toxic waste byproducts by passing them through the bodies of people
first.

The video is available for viewing at:
http://naturalnews.tv/v.asp?v=42652.

Mike Adams recommends these websites for learning more about the scam of
water fluoridation:

The full transcript of the documentary video is available at the following
link:
http://www.naturalnews.com/031541_F.

Dr. Coldwell States That Cancer Can be Cured in Weeks
5384 views - 0 comments